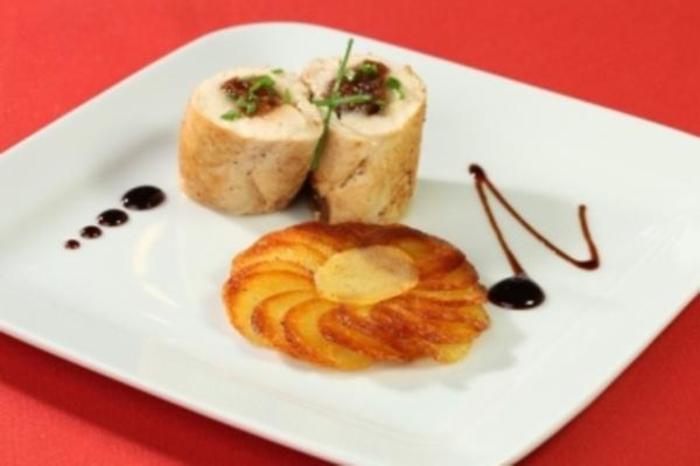 Chicken Breast with a Fig, Port and Pepper Stuffing 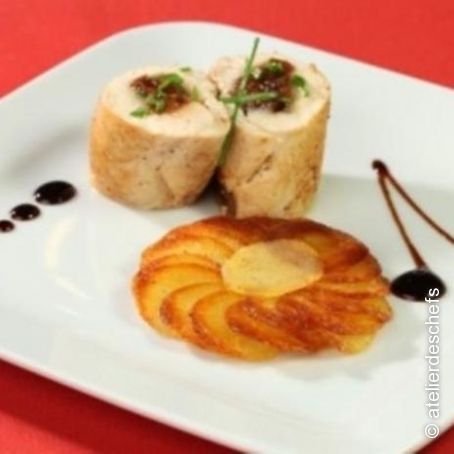 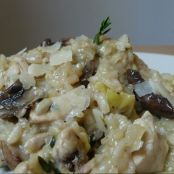 Preheat the oven to 180°C.
Melt the butter over a low heat and allow a froth to form on the surface. Skim the froth from the surface and pour the clarified butter from the pan, leaving the milk solids behind.

Peel the potatoes, rinse under cold water and then thinly slice using a mandoline.
Rinse again and then pat dry.

Place the potato discs in a bowl and season with salt. Add the clarified butter to the bowl, coating all of the potato slices.

Layer the potatoes over each other in individual non-stick moulds and drizzle with any remaining clarified butter. Cover with foil, transfer to the oven and bake for 1 hour.

Heat the port, figs and Jamaican pepper in the microwave.

Peel and dice the onion. Cut the figs into small dices. Wash the chives and finely chop.
Sweat the onion in a little oil with a pinch of salt.
Once soft, add the porto and pepper to the pan and allow to reduce completely.

In a bowl, mix together the figs, onion and chives.
Bring the water to the boil in a large pan.

Make an incision in each of the chicken breasts and add the fig stuffing.
Season the flesh and then wrap each chicken breast tightly in cling film.

Once cooked, remove from the pan and remove the cling film.
Heat a frying pan to hot, add a little olive oil and then pan fry the chicken, skin side down, to give a crispy skin.

Serve the chicken alongside the potatoes and finish the plate with reduced balsamic vinegar and a few sprigs of fresh parsley.

Feel free to roast the chicken breasts - pan fry for a couple of minutes and then transfer to the oven and cook at 180°C for 10-15 minutes. 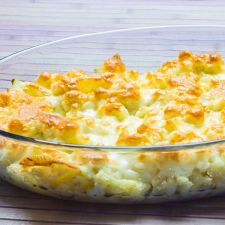