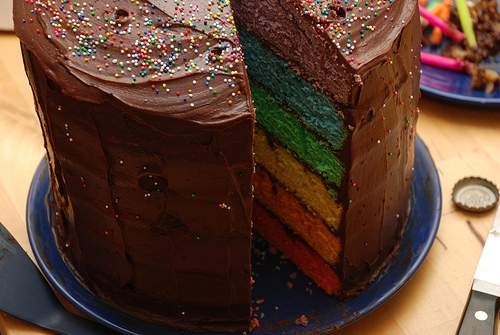 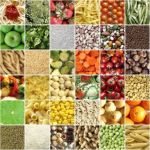 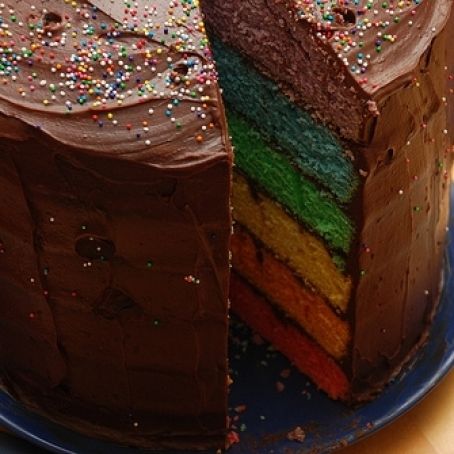 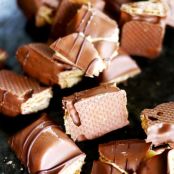 1. Preheat the oven to 180C/160C fan/gas 4. Grease and line 3 x 20cm round cake tins with baking parchment, greasing the parchment too.

2. In a medium bowl, whisk the flour, cornflour, baking powder and ½ teaspoon of salt together to combine, then set aside.

3. Put the butter into a large bowl and using an electric mixer, beat on medium-high speed until smooth and light. Add the sugar and beat until light and fluffy, about 5 minutes, then add the vanilla extract and mix to combine. With the mixer on medium speed, add the egg yolks, one at a time, beating each until fully combined before adding the next. With the mixer on low, sift in the flour mixture in three additions, alternating with the milk, starting and finishing with the flour.

4. Put the egg whites into a clean bowl and whisk until they hold soft peaks. Add the egg whites to the cake batter and gently fold together until just combined and there are no streaks of white. Divide the batter equally between 6 small bowls. Add a small amount of each food colouring to each bowl, enough to make it a vibrant colour.

5. Add the first 3 bowls to the prepared tins, one colour per tin, and bake for 15 minutes, or until they spring back when touched lightly. Allow to cool in the tins for 10 minutes before turning out onto a wire rack to cool completely. Repeat with the remaining 3 portions of batter.

6. For the frosting: melt the chocolate in a heatproof bowl set over a pan of gently simmering water, making sure the base of the bowl doesn’t touch the water. Remove from the heat and allow to cool.

7. Put 190ml water and the sugar into a pan over medium heat. Bring to the boil and have a sugar thermometer ready. Meanwhile, put the egg whites into a clean bowl, ideally of a freestanding electric mixer. Start whisking the egg whites on high speed when the syrup in the pan reaches about 115C on the sugar thermometer. Cook until the syrup registers 121C. With the mixer still running, pour the syrup in a slow stream down the side of the bowl containing the egg whites, avoiding the beaters. Continue whisking on high speed until the meringue is at room temperature.

8. With the mixer on medium-high speed, add the butter a few pieces at a time, beating until fully combined. When adding the butter, it can sometimes look curdled so if this happens don’t worry, just keep mixing and eventually it will smooth out to form a light buttercream frosting. With the mixer on medium speed, pour in the melted chocolate and mix until fully combined.

9. To assemble the cake, put the purple cake layer on a cardboard cake board or serving plate and top with a thin layer of frosting. Repeat the process with the other cake layers in the order of a rainbow - purple, blue, green yellow, orange, red. Spread the remaining frosting across the top and sides of the cake. 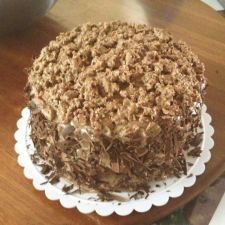