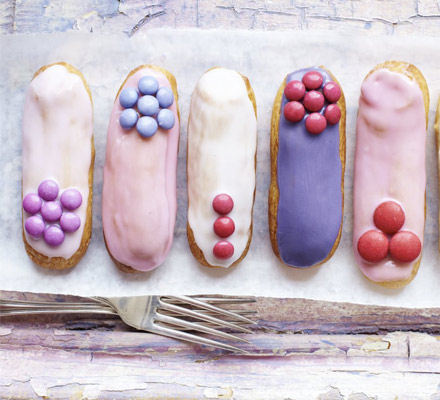 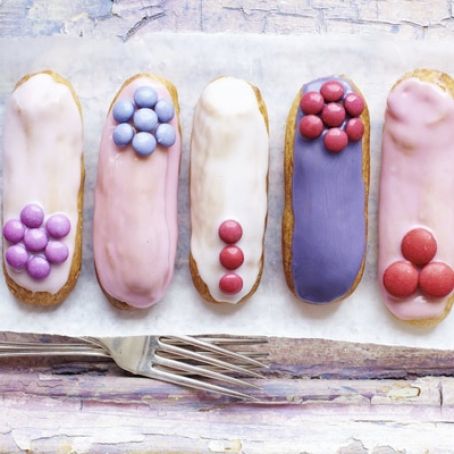 To make the buns, heat the milk, butter and 150ml water very gently in a medium-sized saucepan until all the butter has melted. Get the flour and some salt ready, then increase the heat and bring the liquid to the boil. As soon as it is boiling, remove from the heat and beat in the flour and a pinch of salt with a wooden spoon. Keep beating until the mixture is smooth and comes away from the sides of the pan. Cool for 5 mins.

Beat in the eggs, a little at a time, to a smooth, shiny dough. Spoon into a piping bag with a 1.5-2cm plain nozzle and set aside until ready to bake.

To make the filling, bring the milk just to the boil in a saucepan with the vanilla paste or split pod. Meanwhile, whisk together the egg yolks, sugar and flours in a mixing bowl. Pour on the hot milk while continuously whisking the egg mixture. Discard the pod (if using) and return the mix to a wiped-out saucepan. Cook over a gentle heat, stirring, until the mix is thicker than a custard – it will get lumpy, but just carry on stirring and beat out the lumps. Transfer to another mixing bowl and lay cling film directly on the surface. Leave to cool, then chill.

Heat oven to 220C/200C fan/gas 7. Line a couple of baking sheets with baking parchment. Pipe on 8-10cm long lengths of the dough, about 2cm wide – leaving space to expand between each one. Put in the oven for 5 mins, then reduce heat to 200C/200C fan/gas 6 and bake for 10 mins more until golden, puffed and crisp. Using a skewer, poke 3 small holes along the base of each bun. Put back on the baking sheets, base up, and return to the oven for a further 8-10 mins until slightly crisper. Cool. Can be frozen for up to a month, or stored in an airtight container for up to 3 days – just crisp up in a hot oven again when ready to fill.

Add the cream to the thick custard filling and beat with an electric whisk until it holds its own shape again. Put into a piping bag with a tiny nozzle, then pipe some filling into the bottom of the buns using the skewer holes you made before (see Secrets of success, below). When it squirts back out, that bit is probably full.

Stir the liqueur, if using, into the icing sugar, plus just enough water to make a pretty thick icing. Divide among as many bowls as you want colours, and colour each batch as you like. (Depending on your colouring, you may need to add a drop more water to icings so that they are thick but runny.)

Dip the top of each eclair in icing to cover, or use a teaspoon to spread a little on – use less at first and wait for it to spread and settle. Add sprinkles and decorations, then gently sit on wire racks to set. Eclairs are best eaten on the day they are filled and decorated, before they go soggy.