Pre-heat the oven to 200°C/gas mark 6. Peel and grate the potatoes and onion with a coarse box grater. Put them into a large sieve, then squeeze out any liquid with your hands - the potatoes should be as dry as possible. Season with salt, freshly milled black pepper, olive oil and cayenne pepper and mix well. Leave to stand for a bit then squeeze out once more to remove any remaining liquid.

Heat an oven-proof pan over medium heat. Add a dash of olive oil, then add the potato mixture to the pan. Press down and compact with a wooden spoon to an equally thick layer. Break the butter into smaller pieces then dot them at equal distances around the edges of the pan. Continue frying until the bottom of the hash brown is golden brown and crisp. Invert the hash brown with the aid of a large plate: to do this, place the plate on top of the pan, then, using oven gloves, quickly invert the pan together with the plate. Slide the potato off the plate back into the pan so that the uncooked side is now on the bottom of the pan. Dot the remaining butter in little pieces around the edge of the pan and continue to fry until the bottom of the hash brown is golden brown.

Crack the eggs one by one on top of the hash brown, then season them with Cayenne pepper and a little salt. Bake in the pre-heated oven for 6-8 Minutes until the egg white is set but the egg yolks are still runny.

In the meantime fry the bacon: heat a frying pan over medium heat. Add the sugar, season with a little freshly milled black pepper, then add the butter. When the sugar starts to caramelize, add the bacon and fry for 3-4 minutes on both sides until golden brown and crisp. To serve, transfer the hash brown eggs to a warm platter and top with the fried bacon. 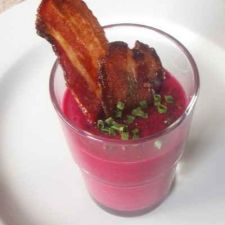