A smooth vanilla ice-cream with a nutty bite. 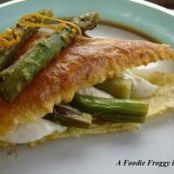 Mille-feuille of asparagus and... 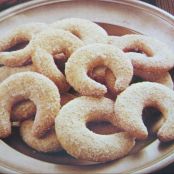 Whisk the egg whites in a large bowl until stiff peaks form when the whisk is removed.

Slowly whisk in the caster sugar, then continue to whisk until the egg whites are stiff and glossy.

Whisk the cream in a separate bowl until soft peaks form when the whisk is removed.

Fold the cream, egg yolks and vanilla into the meringue mixture until well combined.

Pour into a plastic container and freeze for at least two hours.

To make the almond crunch, first line a baking tray with foil and lightly grease.

Roughly chop the almonds and add them to a heavy bottomed frying pan along with the butter and sugar.

Cook over a moderate heat and stir constantly, taking car that it doesn't burn.

When the almond crunch is a golden colour and the sugar has dissolved into a caramel pour on to the prepared tray and allow to cool completely.

When completely cooled place into a polythene bag and with a rolling pin break up into small pieces.

To make variations of this ice-cream omit the vanilla and almond crunch and replace with any of the following at step 2;
100g (3½ oz) stem ginger, chopped, plus 4 tbsp syrup from the jar.
2-3 tbsp coffee essence
2 tbsp brandy
150ml sieved raspberry or strawberry purée
100g (3½ oz) raisins soaked in 4 tbsp rum for 2 hours.