Ambitious doesn’t begin to cut it for French culinary tourists Sandrine and Benoit.

Whether trying their hand at a cooking course, hunting down the best urban street food or haggling with merchants at local markets, the pair is pushing food tourism to the extreme - taking two years to travel and taste the world.

After leaving their respectable jobs as an electrical engineer and IT project manager in Orléans, south-west of Paris, Benoit, 28 and Sandrine, 33 will be fanning the globe to not only find and create great dishes, but to delve deeper into just how food makes us tick.

A Culinary Tour of a Lifetime
Travelling over 730 days, nearly 150,000 kms and through 45 countries, the dining duo plans to invite themselves into strangers' kitchens at every opportunity.

“There are so many ways to eat differently,” Sandrine says. 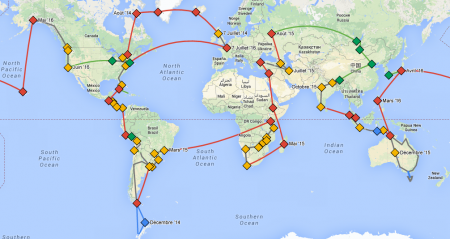 Two-year Plan: A carefully drafted map and budget, the Hungry Travellers, will try not to limit themselves, with an ethos to not to overplan.


“Eating at the table or seated on the floor, with cutlery, with chopsticks or just with your fingers. Sometimes it’s a plate prepared for each person or in a large dish for everyone or even a set of small dishes to share.

“There are also many habits related to the ritual of the meal; wishing someone "bon appétit", using only the right hand to eat, toasting, saying a prayer before starting - there are so many other customs that we hope discover.”


See also: 8 Weird Food Customs Around the World
Want to invite Sandrine and Benoit to cook in your kitchen? Get in contact and send them an email.
Follow the adventure of Benoit et Sandrine on their blog Voyage, Partage and Potage (The Hungry Travellers)

Robert Jacob Interview 10 Clever Ways to Use Your Food Processor

10 Foods To Avoid During A First Date