A self made recipe that I felt would taste nice when put together. The base for this recipe was a classic macaron but I decided to add my own touch to the recipe by incorporating strawberries and blueberries into the recipe. These macarons are perfect for a tea time treat for all ages. They are suitable to give as a gift to any macaron lovers out there. 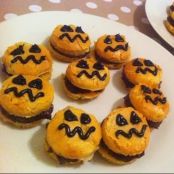 Whisk the egg whites until stiff peaks form when the whisk is removed. Fold in the food colouring, icing sugar and ground almonds until just combined.
Transfer the macaron batter to a piping bag fitted with an 8mm nozzle. Holding the piping bag vertically and working quickly, pipe 6 discs onto the tray, each 3cm in diameter and 2cmapart. (Remember that the macaron batter will spread as it settles, so don’t make the discs too big. Whip the nozzle away after piping each one to encourage the macaron skin to flatten as it settles.)
Set the baking tray aside for 10 minutes to allow the macarons to settle and form a skin, then bake in the oven for 10-15 minutes, or until hardened. Remove from the oven and set aside to cool for 10 minutes, then remove each shell from the baking tray using a palette knife and set aside to cool on a wire rack.
While the macarons are baking make the filling: for the filling, cook the blueberries, strawberries and sugar over a low heat for 15 minutes, or until the sugar has dissolved and the fruit has softened. Pass the mixture through a fine sieve and set the strained liquid aside to cool.
Lightly whip the double cream until soft peaks form when the whisk is removed. Fold in the mascarpone and the cooled blueberry and strawberry coulis until well combined.
Use a palette knife to spread the filling onto the flat side of each cooled macaron shell and top with another macaron shell to make a sandwich. Repeat with the remaining macarons.

Follow the step as stated above and the product should turn out nice. Also make sure that the measurements are accurate and not guessed because this is very important for the macarons.